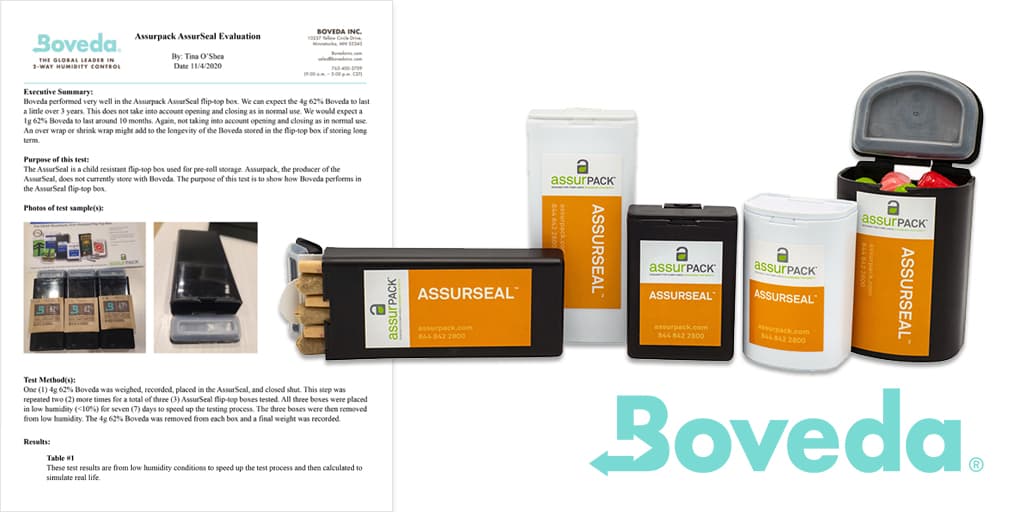 Premium cannabis is a delicate product.

Terpenes — the aromatic oils that make cannabis taste and smell great — evaporate quickly, leaving behind substandard flower that’s a far cry from what came out of the curing room.

The same is true for cannabinoids. Heat, light, and dry conditions degrade them in a matter of weeks. So what’s the solution?

There are a few ways to approach the problem of terpene and cannabinoid loss.

For starters, cannabis should always be stored in a tight-sealing package like the AssurSeal® from AssurPack®, and kept away from light and heat. If you want to go one step further, you can add Boveda® humidity control packets to ensure proper moisture levels. For the ultimate protection, you can do both: AssurSeal® and Boveda® packets.

That’s why our colleagues at Boveda® were eager to test out the new AssurSeal® package. Our AssurSeal® design provides the tightest closure of any multi-pack pre roll package in the industry, and Boveda® was interested to know how long AssurSeal® could extend the service life of their humidity packets.

This article explains the technology and the Boveda® testing process. But for those of you in a rush, here’s Boveda’s final conclusion about AssurSeal.

AssurSeal® extends the service life of a 4-gram Boveda® packet for nearly 3 years — and a 1-gram packet for approximately 10 months.

In one sense, a Boveda® packet is desiccant. Like the packet of silicon beads inside your bottle of vitamins, it absorbs moisture to keep products dry. The reason Boveda® technology works so well for cannabis, however, is the packet’s two-way function. It absorbs and releases moisture to maintain a perfect 62% relative humidity level.

The Boveda® packet uses a combination of water and salts enclosed in a vapor-permeable reverse-osmosis membrane. But over time, the packet loses its ability to regulate humidity as it repeatedly cycles moisture in and out through the membrane.

The packet’s service life depends on how well it’s enclosed. If the packet is left in the open air without an enclosing container, or if the container is poorly sealed, the packet will have a short life. If the packet is housed in a very, very well-sealed container, the life is much longer. That’s where AssurSeal® comes in.

Some cannabis packaging manufacturers use the word “airtight” a little too frequently and without much evidence to back up their claims. In reality, there are no airtight packages — only packages that do a remarkable job of slowing vapor transmission.

Our engineers here at AssurPack® devoted a great deal of time to creating a deceptively simple product: a child-resistant container that seals tightly yet is easy to open.

Throughout the R&D process, they worked with third-party laboratories to test AssurSeal’s airtightness. (Yes — there are specific lab tests for packaging airtightness!) The United States Pharmacopeia has specific ratings for how tightly packages close, and which protection levels are appropriate for which product types.

Ultimately, AssurSeal® tested in the highest category of airtightness, earning the designation of USP671:Tight. The “Tight” rating is 15 times more stringent than the next rated protection level “Well-Closed.”

For further proof, the Boveda® engineers tested the AssurSeal® package using their two-way packets and predictive modeling to see how long cannabis would stay fresh when the two technologies were combined.

Boveda® discovered that AssurSeal® is a game changer — it’s the perfect complement to humidity control packets. What’s more, AssurSeal® is a powerful, terpene-preserving tool in its own right.

In the words of Boveda® researchers, the AssurSeal® is a “game changer for cannabis.” By extending the service life of a 4-gram Boveda® packet to nearly three-years, AssurSeal® raises the bar of airtight packaging.

Conclusion:
AssurSeal® extends the service life of a 4-gram Boveda® packet for nearly 3 years — and a 1-gram packet for approximately 10 months.

The US Pharmacopeia’s airtightness testing procedure is similar to Boveda’s tests, yet different. Instead of testing for moisture loss, these tests measure moisture gain.

In the USP 671 tests, oven-dried calcium chloride granules were placed inside AssurSeal® and kept under humid conditions for two weeks. When subjected to extreme 75% humidity, AssurSeal® showed the same resistance to vapor permeation, and the weight gain from moisture absorption was minimal.

AssurSeal® tested at less than 50% below the threshold required for the highest rating, proving that the package is not just the tightest-sealing package in the cannabis industry, but one of the most “airtight” packages in existence.

If you’re ready to take research into your own hands and see how AssurSeal® can protect your product, reach out to use today for samples.

AssurSeal® is available in two distinctive form factors. The AssurSeal® M-line is designed for multi-pack pre rolls, and features two sizes for short and long cones. The AssurSeal® D-line is suited for loose flower and edibles. Edibles need protection from the elements too! 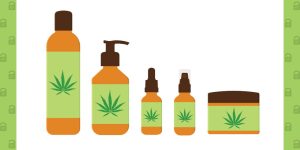 How to Label Cannabis Products the Easy Way 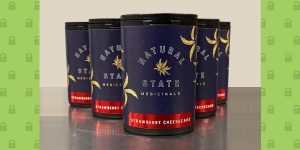 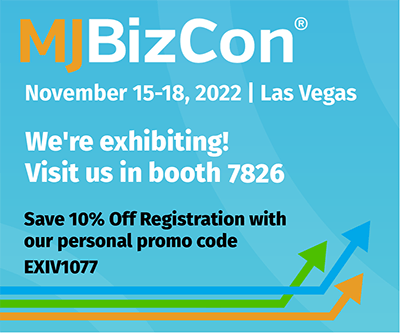